The new office building of the European Patent Office (EPO) in Rijswick, in the Netherlands has been named "Best Tall Office Building" by the Council on Tall Buildings and Urban Habitat (CTBUH). 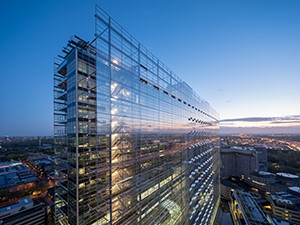 The European patent office Rijswijk building provides a state-of-the-art workplace for EPO staff, as well as providing an internationally recognisable symbol of the European Patent Organisation.

The building has been under construction since 2014 and European patent office staff moved into the building in September-October 2018. The building provides state-of-the-art facilities for EPO examiners and allows increased capacity for hosting oral proceedings for examination, oppositions and appeals which can be conducted either face to face in person or by videoconference. The video conference facilities are particularly important as they allow European patent attorneys from across all European Patent Convention contracting states to attend oral proceedings without the need to travel from their home professional offices and minimises carbon emissions due to travel.

For those occasions when attendance in person is preferred, the Rijswick building can be arrived at on the Eurostar high-speed rail link from the United Kingdom to Rotterdam, avoiding the need for high carbon emission air travel.

The main building is 107 metres high and 156 metres long but has a relatively slim width of less than 25 metres. The building features a double glass facade which houses hanging gardens and cavities between the facades and the main building and channels fresh air into the smart ventilation and climate system. The building features photovoltaic solar panels and an aquifer thermal energy storage system for reducing energy consumption and carbon dioxide emissions. The building is designed to be 20% more energy-efficient than the national limits set by the Netherlands as part of its commitment to meeting EU energy efficiency legislation.

By bringing together examiners, lawyers and support teams on one site enhances synergy amongst EPO departments, leading to improved efficiency. Among those to benefit are the inventors and their legal representatives attending oral proceedings related to the examination of their patent applications.